The BBC isn’t biased. The BBC is credulous.

This is a transcript of a Twitter thread I posted on 30th January, discussing the quality of the BBC’s news reporting at the moment…

1/ I’d like to wibble on a bit about reporting, the BBC, and also take a pop at HM Opposition as well. Partly because of this from BBC’s Nick Robinson (HT @nickreeves9876) and partly because of listening to the Radio 2 news this morning… 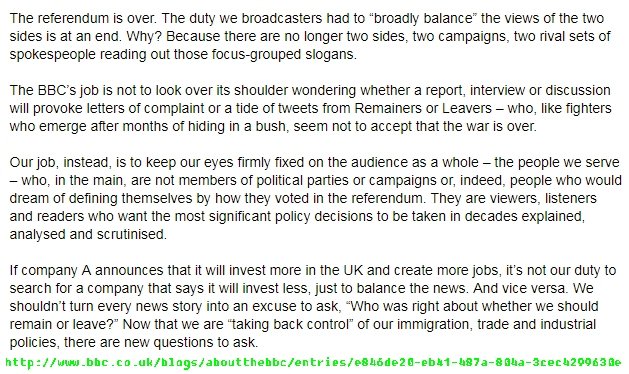 –
2/ Nick Robinson tells us the referendum is over, so there are no longer two sides, no duty for the BBC to report rival views. Not sure I agree with that, but discussing whether democracy ends on a single vote is for another time.
–
3/ And I’m not proposing to look at whether the BBC reports both sides in other circumstances. Did they report both sides of debates on the Poll Tax, or the Iraq war, for example? Can’t remember…
–
4/ …though I will mention as an aside that – despite the existence of man-made climate change being beyond all reasonable doubt – it doesn’t seem to stop the Beeb putting up Lord Lawson as a counter view on a brain-meltingly regular basis.
–
5/ But I think this “vote is over” stuff misses the point of Brexit coverage. The ref may be over, but the discussion is not. The effects are not. The negotiations are not. I think news media – Beeb in particular – have a duty to report this accurately and incisively.
–
6/ Nick Robinson describes the BBC’s audience as “viewers, listeners and readers who want the most significant policy decisions to be taken in decades explained, analysed and scrutinised.”
–
7/ I couldn’t agree more. There is much to explain, analyse and scrutinise. This will affect everybody in the UK, most of us more deeply than we yet fully realise. The BBC has a key role here.
–
8/ Whether you’re left or right-wing, believe the Government or not, you surely agree that flatly reporting Government statements does not in itself constitute analysis.
–
9/ To take an example of what I mean, let’s have a wander through this morning’s BBC Radio 2 news about the Brexit impact report that was leaked to Buzzfeed…
–
10/ I’ve listened to every news spot in Chris Evans’ show, every half hour from 6:30am to 9:00am, & transcribed them all. While Moira Stuart has a voice like a warm hug, it meant I also had to listen to Iain Duncan-Smith, so I hope you understand the sacrifices I make for you.
–
11/ I’ll look at the language used. I’ll also look at any “explanation, analysis and scrutiny.” (Spoiler: or lack of it.)
–
12/ It’s also interesting to see how the reporting shifts, possibly as CCHQ’s PR machine swings into action. And wonder exasperatedly where HM Opposition has got to. So here’s the first, at 06:30.

–
13/ At first glance, not all that bad. The wording is rather soft, though. After all, the document doesn’t *suggest* the economy will grow more slowly, it *predicts* it. Forecasts it.
–
14/ Also – “economy will grow at a slower rate”? While this is true, it’s a bit impenetrable when you’re half-listening over your cornflakes. Why not “the economy will perform worse”? That’s what it means. Why not explain?
–
15/ This use of bland, semi-tortured language characterises the remaining reports, by the way. If I’d spent some time doing a course in analysing bias in news reports, I’d maybe have suggested this sort of construction could undercut the importance of the point being made.
–
16/ Oh, wait, I have done a course in analysing bias in news reports, and I do suggest that.
–
17/ Anyway, the statement “The Government has said that Britain will not be worse off outside the EU.” is entirely correct, and could even refer to a historic statement, not necessarily in response to Buzzfeed. This will change…
–
18/ On the hour reports are longer ones, usually with a headline followed by a more detailed piece. So at 07:00 there’s an opportunity to start the analysis and scrutiny:

–
19/ Good headline, actually. They’ve switched to “forecasts” instead of “suggests”, which is better. But it won’t last…
–
20/ In the main piece, “suggest” is back again and we have the same unnecessarily difficult “grow at a slower rate.” But hello, what’s this about “off-the-shelf” and “bespoke” now?

–
21/ This is the BBC’s own political correspondent providing his own analysis, so there’s no excuse for not highlighting that the EU have repeatedly told the UK a bespoke deal is not on the table.
–
22/ Basically, the “Government source” is allowed to undermine the leaked report by being given an opportunity to make an unchallenged assertion about imaginary bespoke deals. This should have been made clear.
–
23/ There was also an opportunity, in the longer running time, to mention that this new leaked report agrees with previous OBR, IFS and Treasury studies. Analyse and scrutinise, right?
–
24/ And, if we’re analysing, how about some actual numbers? “Between two and eight per cent” means nothing to me, I doubt it does to you. So why don’t we put a real number on it?
–
25/ (grabs fag packet) On 2016 GDP, an 8% loss of GDP would be over £150bn a year. After 15 years, the sum would be commensurately larger. Why not say the numbers? Say “up to £3bn a week”. Say “eight times the supposed Brexit dividend.” Say anything.
–
26/ Oh, and we have the first appearance of an unopposed quote from a Brexiter, but we’re remembering the BBC has no duty to report both sides of this story, so I’m not going to comment. Grumble mumble mumble
–
27/ So on to 07:30. The wording has become even more tortured. “All scenarios studied had reduced figures compared with…” I can’t even get to the end of the sentence, let alone understand it.

–
28/ But at least we’re reassured by the Government’s fictional bespoke deal. That’s clear enough.
–
29/ 08:00. A longer report again. Very similar to 07:00, but the headline wording has become as timorous as the main piece. Growth will slow? Doesn’t sound that bad, does it?

–
30/ So, can I make an observation about bias in reporting? The leaked report “suggests”, but the Government “insists.”
–
31/ And oho, this is the second time Jacob Rees-Mogg is quoted, rather than somebody who actually knows something. “Highly speculative and often inaccurate” could be JRM’s family motto. In Latin, at least.

–
33/ Finally, 09:00. The last of the long on-the-hour reports before handing over to Ken Bruce and I lose the will to live. No headline, straight into the news item.

–
34/ Now we’ve changed again. The language of “three existing models for Brexit” is immediately undercut by the smug rejoinder of the Government saying it will get a bespoke deal (you can almost hear the ner ner ner-ner ner at the end).
–
35/ It’s hard to take this as accidental now. When the promise of a bespoke deal is so directly placed in counterpoint, it’s a serious omission for the news item not to mention that no bespoke deal is actually possible.
–
36/ The news item has moved unquestioningly over time from the Government complaining the report doesn’t model a bespoke deal to the Government saying – unchallenged – that bespoke is definitely what we’ll be getting.
–
37/ The Government response to the report is that it’s no good because it doesn’t model a unicorns and fairies deal. This is where we’d expect to see some analysis and scrutiny, Nick.
–
38/ The rest of the report seems normal, seems norWAIT IDS KLAXON
–
39/ Now, one could argue with some justification that the BBC have given Iain Duncan-Smith a soundbite because they are secretly remainers, and hearing him speak is enough to turn anyone away. But it’s even more delightful written down.
So what’s that again, Iain?

–
40/ So the report’s incomplete, anyway the Government have said it’s no good, but the they haven’t actually looked at it yet, but it makes Brexit look bad, so it should be ignored STOP LOOKING AT IT. Is that the argument(s)?
–
41/ Stepping reluctantly away from the rancid polecat of hate, I know Nick Robinson said the BBC has no duty of representing opposing views, but we’ve had three fact-free spiels: 2x Rees-Mogg and one IDS. Nobody with any actual expertise. This does matter.
–
42/ And BBC News’ coverage has by 09:00 become a veritable soup of unchallenged assertions. When is the “explain, analyse and scrutinise” going to arrive? I dread to think what this item became by the time it hit the phone-in fog-horn froth-fest of the Jeremy Vine show.
–
43/ BBC reporters are clever people. They know what words mean. When they use a particular word, it’s because they intended to use that word. And they should understand the issues they are reporting, to be able to explain, analyse and scrutinise.
–
44/ Look, I would defend a vibrant, independent BBC to my dying breath. But the Beeb needs to get its investigative mojo back. This is the most important thing in UK news for 70 years and they have abandoned the field.
–
45/ Why does this matter? Well, Chris Evans’ show gets more than 9 million listeners. These little news vignettes may be the only exposure millions of people get to this news story. It’s off the news cycle by the evening.
–
46/ This isn’t the worst example, it ain’t even in the top 100. This was just a simple example. Come back, Auntie.
–
47/ Postscript: where was the Labour spokesperson through all this? CCHQ clearly got on the phone to provide reliable rent-a-thug IDS for interview. What were Labour doing while all this was going on?
–
48/ That’s not rhetorical, by the way. I haven’t seen an official statement from Labour, but that doesn’t mean there wasn’t one, just that if there was one it didn’t get prominence.
–
49/ I even went to the trouble of writing Labour a brief statement. They can have this for free. Because if HM Opposition aren’t going to step up when the Government treat us all with contempt then it’s down to us random nobbers on the internet.

–
50/ Oh and I’ve also reworded the BBC’s original summary news item for them, to show it is possible to get the salient points across in one paragraph, and without giving a voice to a single nasty remainer. Don’t say I never give you anything, Auntie.

How can you help?

This website uses cookies to make it work, to remember your preferences and to help analyse visitors.

You can review and change your consent at any time: return here by clicking on the 'Cookie settings' button on the bar at the bottom of the screen (or by first clicking on the 'Privacy and consent' tab if the bar is not visible).
Necessary Always Enabled
Necessary cookies are absolutely essential for the website to function properly. These cookies ensure basic functionalities and security features of the website, anonymously.
Functional
Functional cookies help to perform certain functionalities like sharing the content of the website on social media platforms, collect feedbacks, and other third-party features.
Performance
Performance cookies are used to understand and analyze the key performance indexes of the website which helps in delivering a better user experience for the visitors.
Analytics
Analytical cookies are used to understand how visitors interact with the website. These cookies help provide information on metrics the number of visitors, bounce rate, traffic source, etc.
Others
Other uncategorized cookies are those that are being analyzed and have not been classified into a category as yet.
Advertisement
Advertisement cookies are used to provide visitors with relevant ads and marketing campaigns. These cookies track visitors across websites and collect information to provide customized ads.
SAVE & ACCEPT
Powered by